The challenges of building a Churn model 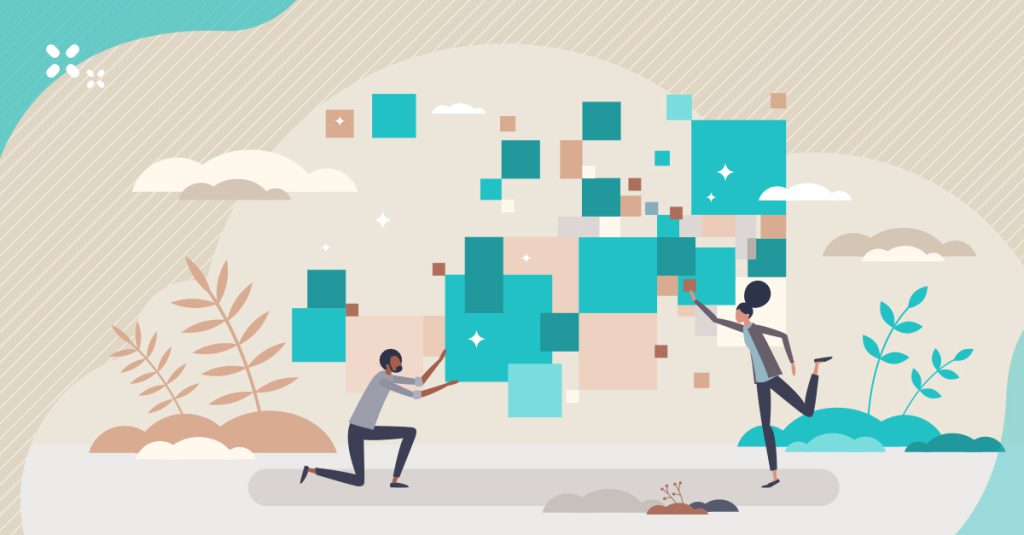 Churn (sometimes called attrition), in its broadest sense, is the state in which individuals or items moving move out of a collective group and is one of two primary factors that determine the steady-state level of customers a business will support.

“This is why it comes not as a surprise that, as customer retention is one of the primary KPIs for companies in any industry, a bad customer experience that would lead to customer churn to competition, is a challenge that needs to be confronted all the time.”

Why do we do churn prediction?

This is why churn prediction has turned into one of the main challenges the companies have to face, with its primary goal being to predict a list of potential churners, so that providers can start targeting them by retention campaigns.

Predicting that a particular customer is at high risk of churning and being able to do something about it, is a huge advantage for a company and a potential money saver, especially for companies with large customer acquisition costs.

The churn rate is very important in the retail industry, as it provides clarity on the quality of the business, shows customer satisfaction with the product or service, and allows for comparison with competitors to gauge an acceptable level of churn.

To better assess our approach to the churn prediction model, we set the following conditions

-the customer churn predictive model was set to predict the churn on either 1,3 or 6 months in advance

-the dataset was to be sliced into two parts, with the first one containing all history transactional data that we use to extract features, and the second one, containing the labels for the evaluation of the model, based on a selected period that we want to predict the churn.

The dataset model can be depicted below, with the exact date that we slice our dataset, being called the cut-off date. 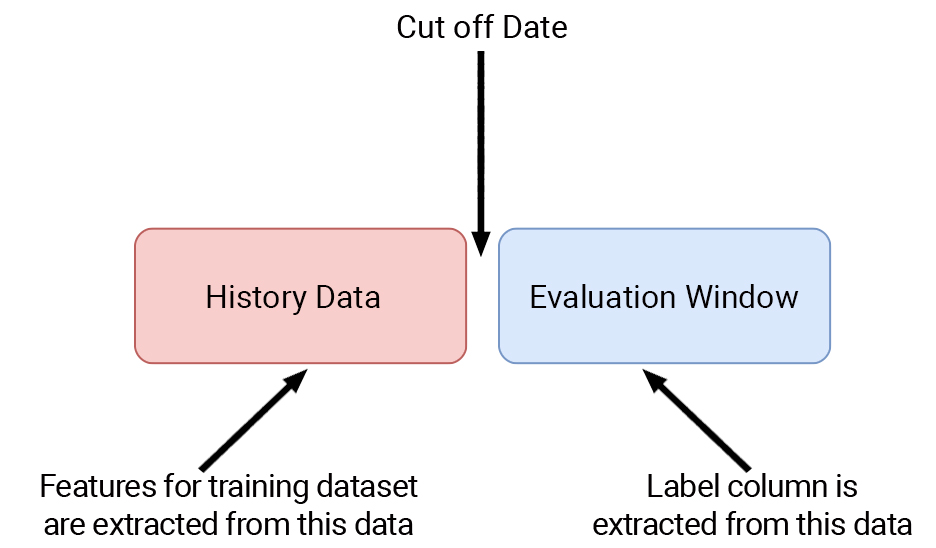 Following an analysis based on the business insights from our team, we decided that the interval for the evaluation window for this industry and the customer, that is predicting that a customer may or may not churn, should be best set at six months,

By choosing the churn period to be 6 months, the average transaction frequency for our customer database is determined to be ~2 (=12 / 6).

Regarding the dataset model, we identified the 3 following approaches, with respect concerning to the evaluation window:

Following simulations, it was found that the best approach for dataset creation was the third one.

Having determined the dataset model, it is now time to dive into the model implementation.

Transactional, demographics, and campaign data will be used to extract the features for each customer, to be effectively stored according to the following table, with each row representing a distinct customer and each column representing a feature.

Using the data available, we extracted the features for each customer below:

The churn Factor is one of many features we use for our classification (churn prediction) task.

But how is it generated?

Let’s take, for example, Person A (Cathy) and Person B (Mike). They have both made 4 transactions in total, but their activity frequency is different, as well as their time since their last activity.

Thus, Mike has a bigger churn factor than Cathy.

Train and test set to split. Which we used as a test set.

To make the evaluation process more precise, we did not use a usual train-test split for our dataset. We preferred to use a custom test set of customers that had made a single transaction within the last 12 months(36334 customers or ~13% of the total dataset). This way, we would avoid testing the model on customers that had not made a transaction for a long period, and on the other hand, evaluate its performance (see the quality of its predictions that an active customer will (or will not) make a transaction in the next 6 months). The value counts for the train and test set as shown below:

Reactivated customers, why they exist.

In this stage of classification, we should take a quick look at our approach to the churn prediction problem. From the definition, we are trying to predict which customers will not make a transaction in the next 6 months. And that is the way we created the target label for our dataset (by looking at which customers made a transaction 6 months after their cutoff date and defining a binary label). 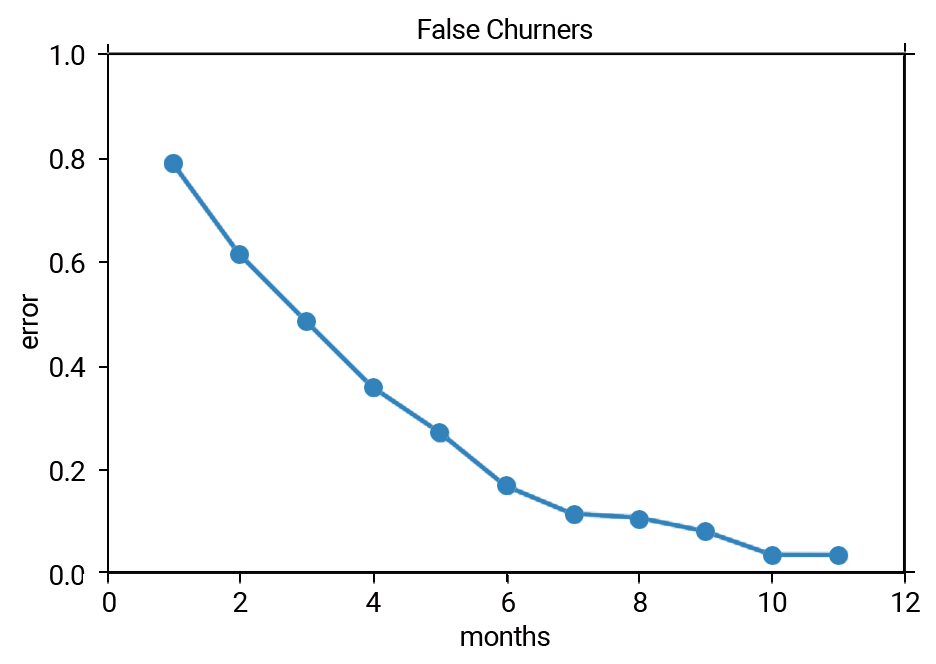 For the classification needs, a comparison of 5 classifiers was made to find the model that best suits the churn prediction problem. These were:

The metrics that were used to evaluate the models’ performance were the AUC Score, Accuracy, Recall, Precision, and F1 Score.

And their comparison can be shown in the table below:

The best performing algorithm on most metrics was the Catboost Classifier.

Alongside the ML algorithms that were tested to assert the churn prediction problem, various performance-enhancing techniques were used to boost the algorithms (such as feature selection, scaling, and normalization). Although, as we did not observe any significant performance boost, we do not discuss them further.

The metrics that were used to evaluate the classification were:

Accuracy is not a very precise metric for binary classification. It is easy to get a high accuracy score by simply classifying all observations as the majority class. For example in our case, by classifying all customers as churners we can get an accuracy of over 0.7.

ROC AUC score is equivalent to calculating the rank correlation between predictions and targets. From an interpretation standpoint, it is more useful because it tells us that this metric shows how good at ranking predictions your model is. It tells you what is the probability that a randomly chosen positive instance is ranked higher than a randomly chosen negative instance. However, it should not be used for imbalanced datasets as the intuition is the following: the false positive rate for highly imbalanced datasets is pulled down due to a large number of true negatives. 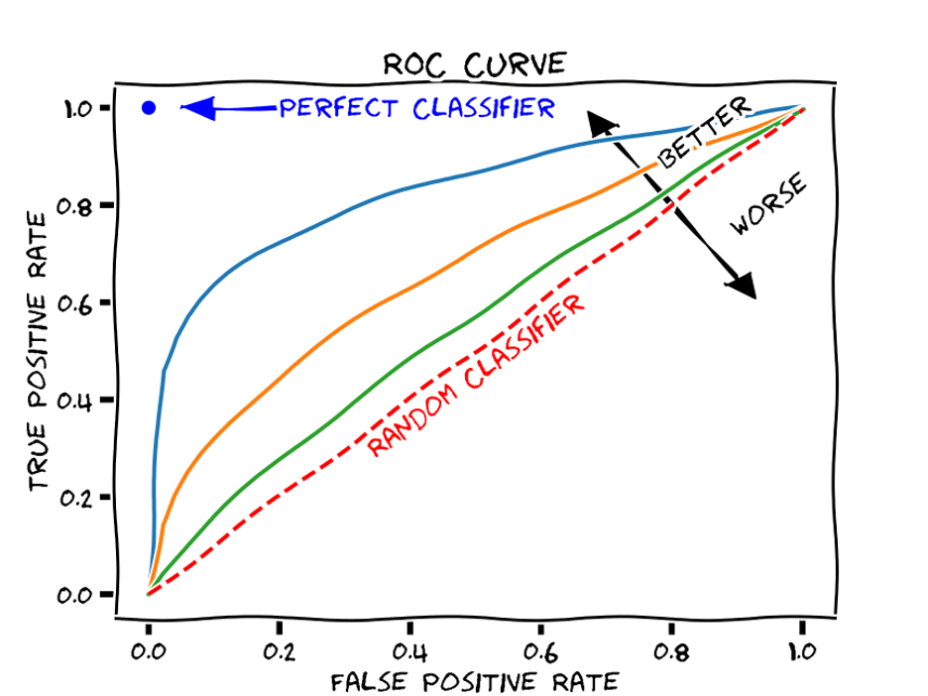 Precision or Positive Predictive Value measures how many observations predicted as positive are positive. Taking our churn prediction example tells us what is the ratio of transactions correctly classified as churn. When you are optimizing precision you want to make sure that people that you put in prison are guilty.

It’s the harmonic mean between precision and recall. F1 Score is a valuable metric for ML models, especially for binary classification. 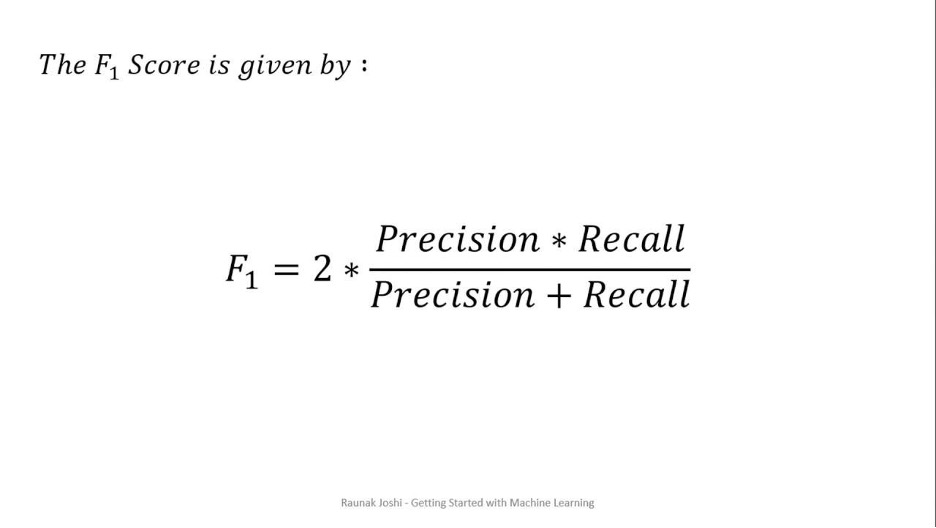 Feature Importance refers to techniques that calculate a score for all the input features for a given model — the scores simply represent the “importance” of each feature. A higher score means that the specific feature will have a larger effect on the model that is being used to predict the target variable – in our case whether the customer will or not churn.

As we can observe, the number of different stores (store_counts), the age, the percentage of discount products the customer has bought, etc. are some of the most “important” features of our model.

For example, a low number of store_counts (or the number of different stores a customer has visited) or a high age value are some examples of high importance(is significant for the model to predict the customer as a “1” or a churner). 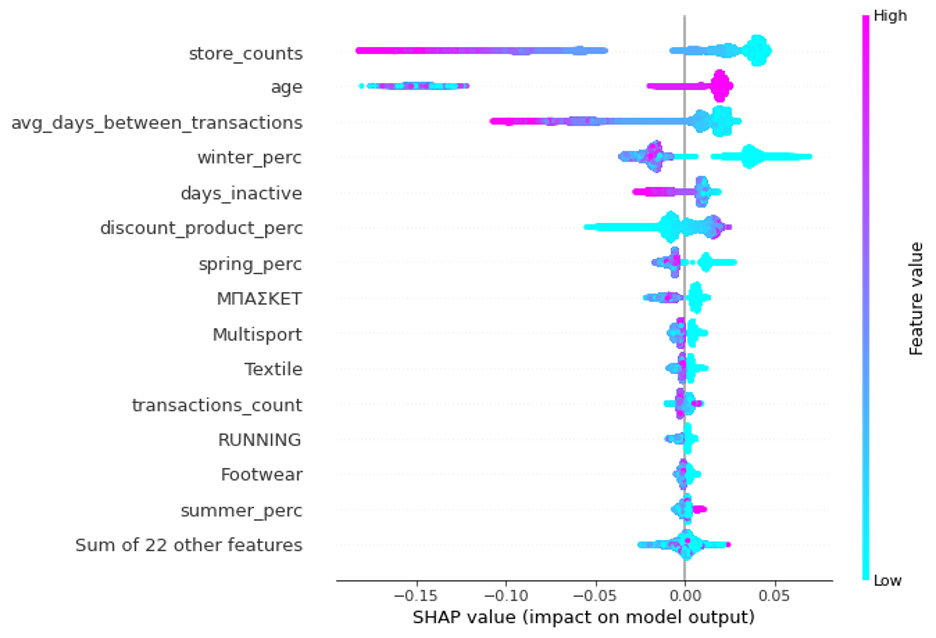 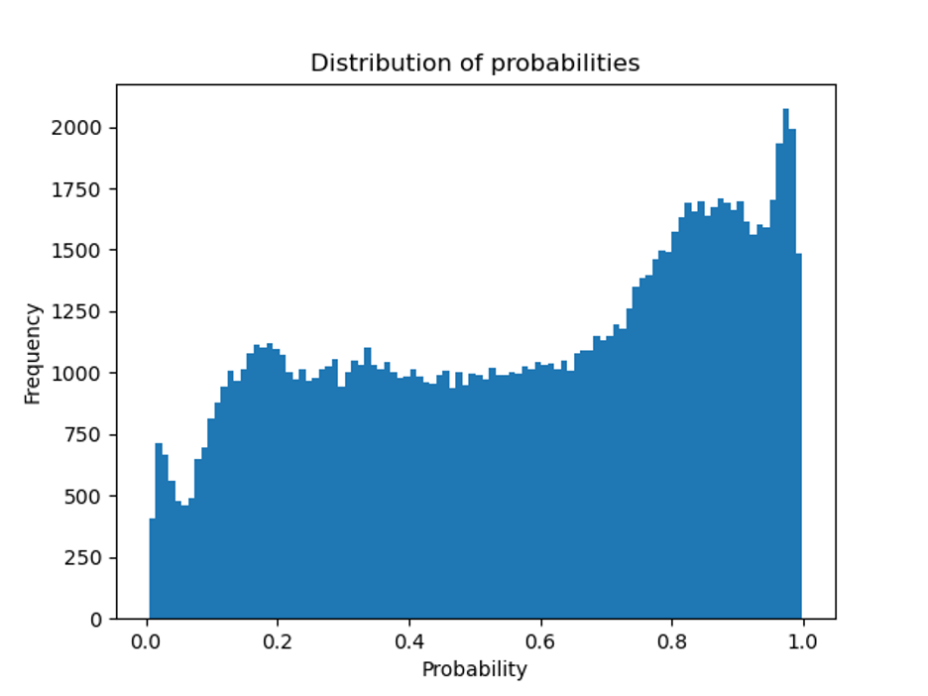 What is the impact of the model on numbers?

Now that it is explained how the data is sourced and the churn target is created (which is one of the most challenging parts so far, we can discuss how this machine learning model will be used in the business. Read the below diagram from left to right: 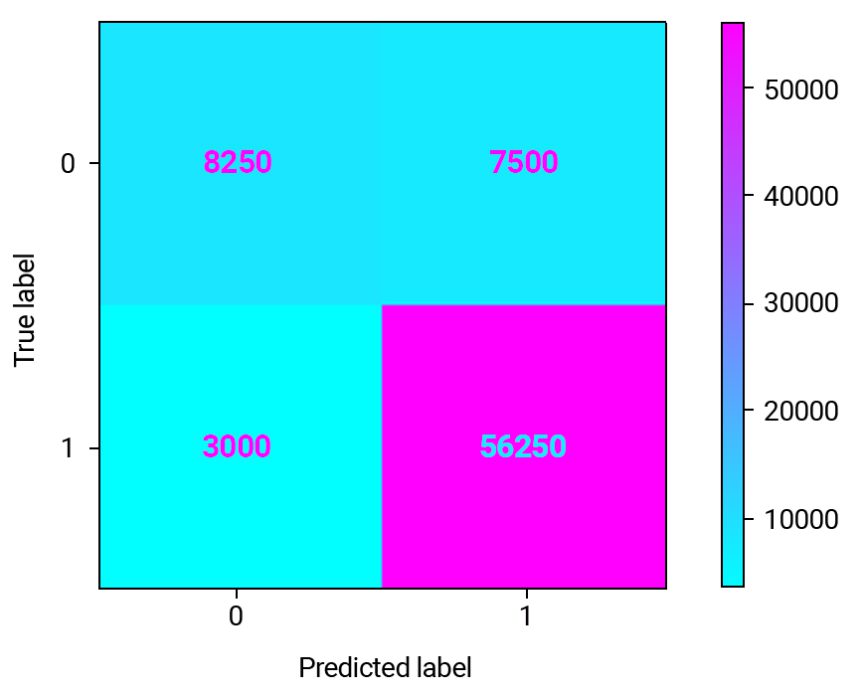 This confusion matrix is on a subset of the customer database for our retailer company customers which include 75000 rows. We have 56250 True Positives (75%) — these are the customers which will probably churn in the next 6 months and for which we will be able to extend their lifetime value. If we wouldn’t predict, then there was no opportunity for intervention.

We also have 7500 (10%) False Positives where we will lose money because the promotion offered to these customers will just be an extra cost.

So far we have trained multiple models to select the best model giving the highest F1 Score, followed by tuning the hyperparameters of the best model to squeeze a little more performance in terms of F1 Score. However, the best F1 Score doesn’t necessarily translate into the best model for business.

In a churn model, often the reward of true positives is way different from the cost of false positives. Let’s use the following assumptions :

NOTE: The values of the assumptions made above are indicative and were made to explain the actual model impact.

Using these assumptions and the confusion matrix above, we can calculate the $ impact of this model:

Although it’s a good model, it’s not a business-smart model.

It is doing a pretty good job compared to having no model at all, but if we want a model that maximizes the business value, we will have to train, select, and run optimizations using business metrics (like the metric we mentioned above) instead of any conventional metric like F1 Score or Accuracy.

We managed to increase profit with a model that does 2% less in AUC than the best model.

How did this happen?

Well, for starters, the F1 Score or any other out-of-the-box classification metric (Accuracy, Recall, Precision, AUC, Kappa, etc.) is not a business-smart metric, so it does not take into account the risk and reward proposition. Adding a custom metric and using it for model selection or optimization is a great idea and the right way to go with.